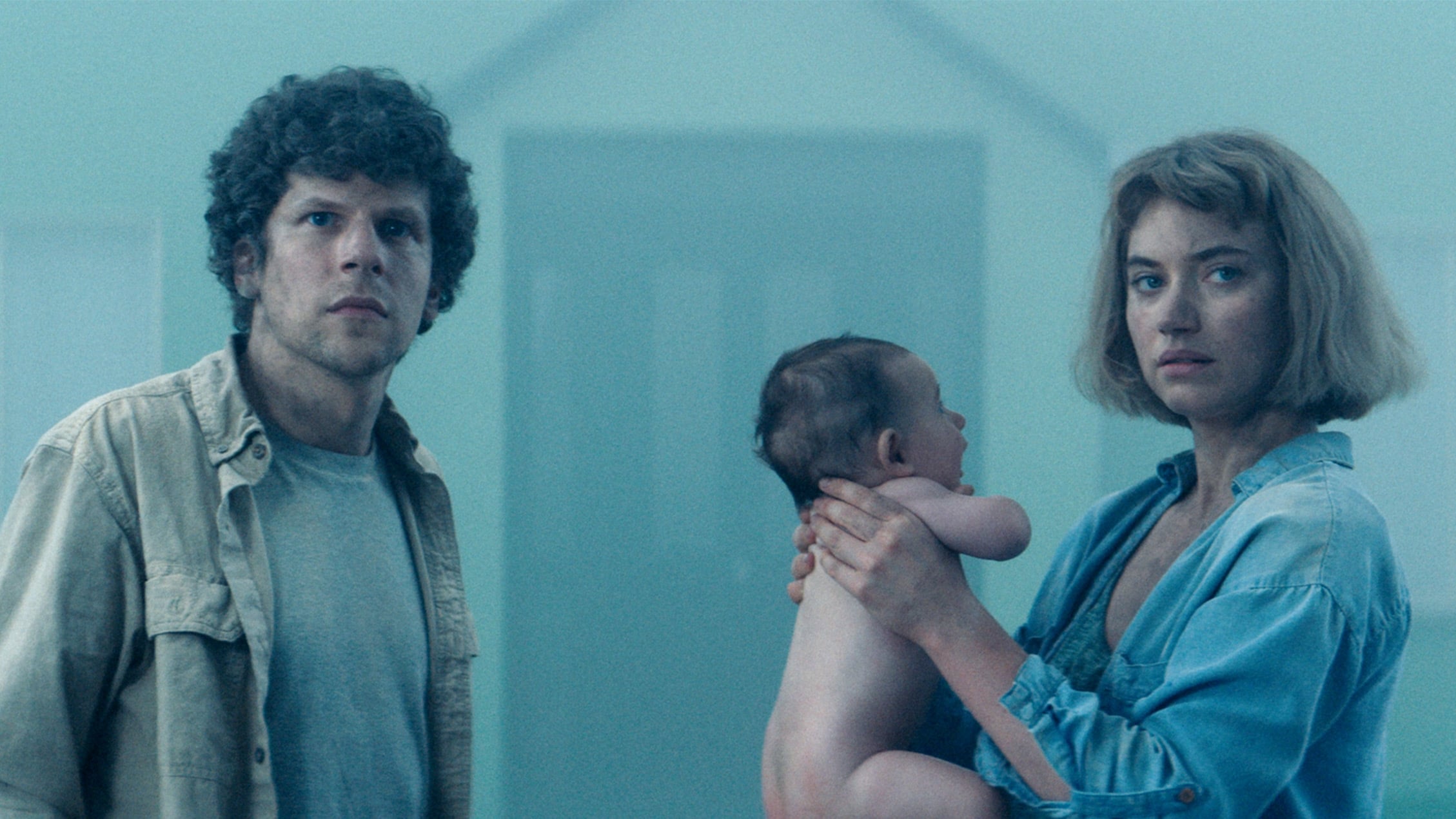 You're home. Forever.Jul. 12, 2019Ireland97 Min.R
Your rating: 0
6 1 vote
HorrorScience FictionThriller
what going on?

Gemma (Imogen Poots) and Tom (Jesse Eisenberg) have been a couple for a while, so it’s time for the next step. Why not buy a house together? Something that only belongs to them, becomes their new home? They are not really convinced of what the broker is trying to show them. Somehow the two of them don’t manage to say no either. They will soon regret that, if not only the gentleman with the big smile is strange. So is the house. However, it only gets really strange when the agent suddenly disappears and the two of them cannot find their way out of the settlement. After all, there are hundreds of houses there, all completely identical…

For some, life in the American suburbs is the realization of a dream, the symbol of having made it. For others it is a symbol of imprisonment and a lying surface in which nothing is real and any deviation from the norm is severely punished. Which of the views director and co-writer Lorcan Finnegan (Without Name) takes is not really a secret. His vision of a rigid life is a nightmare when Vivarium turns the row house into a prison from which there is no escape. In which there is also no real life.

The title already reveals that, of course, as Vivarium refers to an artificial facility in which animals are kept, including aquariums and terrariums. But there are no animals here. In fact, animals are not to be seen far and wide after the prelude, nor anything else that has anything to do with natural life even in the remotest sense. They are replaced by Gemma and Tom, who at least theoretically find everything they need in the system. There is a place to sleep, sanitary facilities, and you don’t have to worry about food. And yet it becomes clear relatively quickly that this supposed dream is not one.

This can now be seen as an attack on the conformist life of a segregated community. This can also be interpreted as a comment on our dealings with animals, if we create a supposedly species-appropriate habitat for them, which then only leads to misfortune. And of course Vivarium – The House of Her (Alp) Dreams, which premiered during the Semaine de la Critique in Cannes 2019, has a lot to say about the differences between men and women when Gemma and Tom gradually surrender to their roles. Finnegan and his script partner Garret Shanley leave it open how much of this behavior is really due to natural predispositions and how much is a social construct here too.

This is certainly not overly subtle as a metaphor. Finnegan addresses a number of interesting topics, but does not allow much discussion. Vivarium, however, convinces with the audio-visual implementation. And of course the cast. From the beginning the film has a very mysterious mood that quickly turns into the surreal. The skillful combination of real elements and obviously artificial ones creates a very special atmosphere. As if you had put people in a picture and left them there alone. The design of the labyrinth-like facility is great, as are small details such as the furnishings or the clouds, which are more like the idea of ​​a cloud.

In the middle part, it drags a little when Vivarium doesn’t get much more out of its scenario than was established at the beginning. There is simply too little new happening, which is obvious in view of the subject, but also a little tiring. In contrast to the strictly symmetrical assembly line houses, the film definitely has its shortcomings. But the team Poots and Eisenberg, which this year also in The Art of Self-Defense was seen, gets a lot out of this strange madness. The same applies to the supporting actors, who give themselves completely to overacting and represent bizarre images of a person. Since the sound design also contributes to the fact that, contrary to the advertising, you never feel at home here, the atmosphere is sometimes weird, sometimes scary, this supercooled trip is a hot tip for fans of classic mystery series in the style of Twilight Zone.

We gather the Vivarium movie resource from the internet. You can watch Vivarium streaming online here for free, or find the cast or characters or other information of this movie. You don’t need to pay for Netflix or Hulu or HBO, just choose the video source and click to watch Vivarium Full movie or trailer.